Post your tips & tricks here for creating slide shows with ProShow Gold. This could include suggestions for style and content in addition to working with the software itself
Post a reply
8 posts • Page 1 of 1

I've been playing with center tilt function Can anyone explain it. haven't noticed any change
Top

I am only aware of horizontal and vertical tilt.
To what exactly are you referring?
Mona W.
SeeMona's Blog - Slide Styles, Transitions & Templates
Top

Like Mona, I've never heard of "center" tilt. The tilt feature comes in two flavors at this time: horizontal and vertical

Look here for more information on the tilt feature in Gold:

It will probably answer your question...

If what you're describing as "playing with the center tilt" is actually the "ROTATE" setting, that's not a tilt feature. All it does is make an image spin. Changing the rotation center doesn't make it tilt either.

Tilt-Vertical, Tilt-Horizontal, and Rotation are all a form of the same thing: a circular motion around a different axis. Rotation is not called 'tilt-Center' because it was the first form of rotation we were given and I doubt Photodex was ever contemplating any other rotation type motion.

The function "Rotation" rotates the layer around what can be called a Z-Axis -- an imaginary line which extends into and out of the screen perpendicular to the plane of the screen.

The function "Tilt-Horizontal" rotates the layer around what can be called the Y-Axis -- an imaginary line which extends up and down the screen, perpendicular to the horizontal plane and to the Z-axis plane

The function "Tilt-Vertical" rotates the layer around what can be called the X-Axis -- an imaginary line which extends to the screens' left and right, perpendicular to the vertical and to the Y-axis plane.

All of these rotation motions are mutually perpendicular to each other. 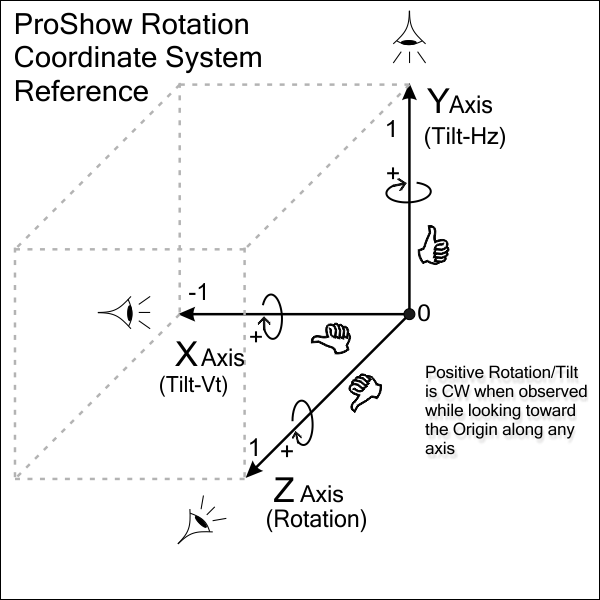 PS I guess I should say that "0" (the origin) in the graphic is the "center of rotation" ... or the location on the axis around which the circular motion occurs.
Last edited by im42n8 on Mon Sep 30, 2013 1:20 pm, edited 1 time in total.
What's New: Tools for ProShow: v11.42a Access ProShow capabilities Photodex doesn't provide (For PSG & PSP).
FPVP Blog "Making the Difficult Easier," FPVP News
Top

mikey
You can't have too many gadgets or too much disk space !!
mikey (PSP6, Photoshop CS6, Vegas Pro 14, Acid 7, BluffTitler, Nikon D300s, D810)
Lots of PIC and Arduino microprocessor stuff too !!
Top

Mikey, did you ever notice that the rotation direction on the X-Axis is 180-deg out from convention? How, they didn't catch that before they released it is kind of a surprise ... and by the time someone mentioned it to them ... it was way too late to do anything about it.

Yeah, part of life seems to be getting used to the fact that some things just have left hand threads

Users browsing this forum: No registered users and 1 guest