Post a link to your shows created with ProShow Producer and get feedback from others. Please include a short description or title for each show link along with the approximate running time. If you don't want to chance getting criticism, please don't post your show.
Post a reply
10 posts • Page 1 of 1

Been going to Colonial Williamsburg for over 50 years...
Here is a walk down Duke of Gloucester Street:

To achieve the Williamsburg Christmas look, only fresh or dried natural material are used. Evergreen plants that were available in the 18th century were pine, holly, ivy, magnolia, fir, and mistletoe; plants included in many of today’s holiday decorating, such as poinsettia, nandina, and pyracantha were not available then.

It is 15 minutes long so get a cup of coffee and sit back and enjoy.

Loved seeing Williamsburg at Christmas, especially all the different wreaths and window decorations. I was there in the summer several years ago, but I’m sure it’s extra special at Christmas.

Glad you shared your show.. I enjoyed it.

Very nice show Wesley !
Nice to watch, very good foto's of very nice decorations !
Working with a dark background works very well with the subject.
Nice music and the sounds of drums, horse hooves or cannons.
My compliments!
I want to walkt there also !
How many ours of work ?
Riekelt Koffeman

Lots of hours...Reworked shows from 2004, 2007, and 2015...
Decided to rework due to COVID19 and reports that Colonial Williamsburg decoration not up to previous years...
Wesley

Christmas Williamsburg Style:
The first of December marks the start of the Christmas season in Williamsburg, Virginia, the 18th century historic area restored with great attention to detail and the generous funds of the Rockefeller family.

While there is evidence the Virginia colonists decorated the interiors of their homes with pine, holly, and mistletoe, the exterior decorations are a more recent addition. In Libby Oliver and Mary Theobald’s book Williamsburg Christmas they point out three major influences on the Williamsburg Christmas decorating style:
1—15th century Italian sculptor Luca della Robbia’s enameled terra cotta compositions of fruit and foliage
2– 18th century English nurseryman Robert Furber’s artistically rendered catalogs of fruit and flower-outlined materials that were available during the Colonial period.
3– The ornamental wood carvings of 17th century English sculptor Grinling Gibbons who used vines, leaves, pods, and flowers as his subjects, which provided a natural, flowing influence on arrangements.
Symmetry is an important consideration, both in design and placement of wreaths, and in the equal spacing of fruit and flower clusters.
Columns and railing can be decorated with natural garlands that can also outline windows and doors. These are most often made by attaching clusters of greenery to a twine base.

One of the highlights of the Christmas season in Williamsburg occurs the first Saturday in December when the Grand Illumination takes place. Thousands of visitors come to follow the fife and drum corps as they march through the 301 acre restored area where over 50 shops, taverns, exhibition buildings, and offices along with nearly 85 homes have been decorated for the holidays. The decorations are done in the space of four days by 16 carpenters, designers, and their assistants. Because wildlife (squirrels, birds, raccoons) can have a detrimental effect on natural materials, particularly the fruit, the decorations are replaced twice during the holiday season. The materials used to decorate Colonial Williamsburg include:
More than 3 miles of white pine roping
2550 white pine and Frasier fir wreaths
15 truckloads of pine, holly, boxwood, magnolia, and berries
20 bushels of apples
7 bushels of lemons and limes
6 bushels of oranges
Great quantities of pomegranates, grapes, pineapples, and kumquats
Over 1200 electric candles that are lit at dusk each evening in the windows of buildings in the Historic District.
Top 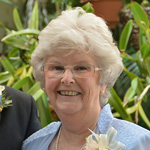 Hi Wesley. I did as you said, made a coffee and settled down. Really enjoyed seeing all the different decorations, and marvelled at the different shapes of the wreaths. So nice to see natural materials being used to such effect.
I thought you did a great job of incorporating the styles that you used and appreciated the different framing colours and methods you used and also all the cropping you had to do.
I think that Proshow and Photopia has kept many of us sane this year. It has been good to have something to think about and to escape for a while from the worries of the world.

Well done and thank you for sharing.

Cheers from ‘down under’

Good idea to rework show - with no holidays in sight, reworking some of my shows previously done in Proshow Gold might be an answer to boredom!!!!!

Hi Des,
These are styles I use often so recognised them straight away. The first one at 1.50 is from Mona’s Parade Styles available at Seemona’s Blog. The other two are from Photodex in Style Pack 1. The style at 2.20 is called Advancing and the style at 11.20 is Next 1.
Contact me by PM if you need the latter two.

I was just about to post a request for info on the styles when I read your response. Well spotted and thank you very much

These are styles I use often so recognized them straight away. The first one at 1.50 is from Mona’s Parade Styles available at Seemona’s Blog. The other two are from Photodex in Style Pack 1. The style at 2.20 is called Advancing and the style at 11.20 is Next 1.
Contact me by PM if you need the latter two.

Users browsing this forum: No registered users and 3 guests